The NeuraLabel 300x NT Color Label Printer is a high-speed, variable-width inkjet label printer that is part of NeuraLabel’s 300x Series label printers. The 300x NT is intended for creating on-demand labels that are both BS5609-certified1 and GHS-compliant, and incorporates the smallest possible footprint of any 300x Series label printer and produces high-quality media rolls due to its intelligent optical sensors with proprietary control algorithms to simultaneously monitor the unwinding and rewinding speeds.

Built on advanced HP PageWide® technology, the NeuraLabel 300x NT is capable of print speeds of up 100 feet per minute (30.48 meters per minute) and features a stationary HP PageWide® printhead with over 40,000 inkjet nozzles capable of print resolutions up to 2400 x 1200 dpi. The NeuraLabel 300x NT Label Printer can print labels ranging from 6″ to 8.5″ in width, on sheeted, fan-folded and roll-fed label media (supports media rolls with up to 8″ outside diameter).

What’s in the Box

1 NeuraLabel’s 300x Label Printer must use OEM NeuraLabel 300x pigment inks in combination with various blank label media that has been BS5609-certified to be used with the NeuraLabel 300x.
2 Important Warranty Notices: End-users are required to register their new printer on NeuraLabel’s website immediately after receiving the printer to ensure warranty coverage. Texas Label Printers, LLC is not responsible for registering the end-user’s printer. Moreover, failure to print with authentic NeuraLabel products and recommended media will void the manufacturer’s warranty.

There are no reviews yet.

Add some products to compare. 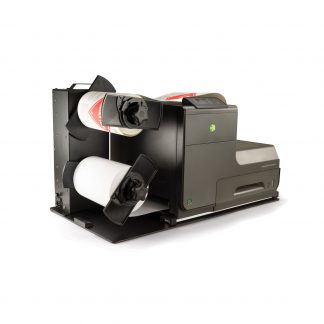